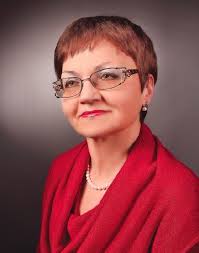 Svitlana Zhabotynska is professor of Linguistics specializing in cognitive and neurophysiological linguistics. Dr. Zhabotynska has worked as a Senior Fulbright Scholar in Ukraine, as well as at the University of California, San Diego.   Her home institution is in the Department of English Philology, Bohdan Khmelnytskyi National University in Cherkasy (Ukraine).

Svitlana Zhabotynska obtained her Candidate of Sciences (PhD) degree from Kyiv State Institute for Foreign languages (1982), and her Doctor of Linguistics (Habilitation) degree from Moscow State Linguistic University (1993) and Kyiv National Linguistic University (2000).  Since 1990, she has been doing research in the field of cognitive linguistics that studies the nature of interaction between language and the mind. As a Senior Fulbright Scholar, she stayed with the University of Illinois at Urbana-Champaign (1995), and the University of California at San Diego (2000-2001) where she was exposed to the accomplishments of various American schools of linguistic pragmatics, cognitive linguistics, and neurolinguistics. She is the author of Semantics of Lingual Networks, a conception that develops methodology for construal of linguistic and-non-linguistic information. Her 148 scholarly publications in the field of cognitive linguistics and cognitive science focus on the conceptual foundations of various linguistic phenomena (part-of-speech systems, derivational morphology, lexical meaning, lexical fields, syntax, text and discourse organization), and their application in the language classroom. Of late, the spheres of her particular interest have been political linguistics (the use of language as weapons in the information war), and neurological foundations of language acquisition and bilingualism. At her home university, among other classes, she teaches theoretical linguistics, research methodologies of cognitive linguistics, and conceptual modeling for language acquisition. She guest-lectures a lot at different universities of Ukraine and Russia.

Svitlana is interested in gathering a team of Ukrainian specialists knowledgeable in the fields of neuro-, psycho, and sociolinguistics, to hold a round table, and to define their prospective contribution to the project. She plans to collect the theoretical data concerning neuropsychological and psychological aspects of multilingualism and relate these data to the linguistic situation in Ukraine and to write 2 papers on the topic, as well as popularize the information about neurological and psychological aspects of bilingualism through mass media. She is also interested in establishing the attitude of Ukrainian public to Ukrainian-Russian bilingualism via conducting a number of psycholinguistic experiments with university faculty and students, to process the data, and write a paper on this topic. She is planning to collect the data from the Internet resources (newspaper articles, videos, memes, etc.) that demonstrate attitude of the public towards the linguistic situation in Ukraine, analyze the data and write a paper on this topic. Dr. Zhabotynska is very much interested in developing proposals as to diminishing the level of public aggression in the discourse about languages in Ukraine, and she plans to develop proposals concerning teaching languages at the secondary and post-secondary level.

forthc. Getting conscious of consciousness: theory and practice. Building the new Ukraine. Collection of papers (materials of the conference held in Kyiv on 27 November, 2014). Kyiv: Ukrainian Fulbright Circle. (In Ukrainian).

2014   Multilingualism in Ukraine: scholarly foundations. Social responsibility of intellectuals: A round table of the Ukrainian Fulbright Circle. Mykolayiv, 8 July, 2014. Abstract of the presentation. Internet:  http://www.fulbright.org.ua/uk/news/168/zhabotynska.html (In Ukrainian).

2000    The image of Ukraine as a political concept. Messenger of the Ukrainian Society for the Study of English. Scholarly Journal. Kharkiv: Konstanta, pp. 110-121 (with N. Chaban).

1997    Contrastive pragmatics: WE, THEY and TOGETHER. Proceedings of the 11th Annual International Conference “Pragmatics and Language Learning”. Urbana: University of Illinois at Urbana-Champaign, 64-65 (with N. Chaban).