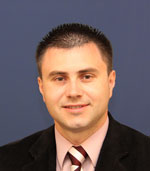 Background:
Throughout his career, Benjamin has worked as a teacher, researcher, manager, and professor in the field of education in Ukraine and Canada.

Kutsyuruba, B., & Kovalchuk, S. (2015). Stated or actual change in policy terrain? Review of the literature on the Bologna Process implementation within the context of teacher education in Ukraine. Journal of Ukrainian Politics and Society, 1(1), 33-57.

Kutsyuruba, B. (2011, July). Education in the period of post-Soviet transition in Ukraine. Paper presented at the 3rd International Conference on Education, Economy and Society, Paris, France.

Kutsyuruba, B. (2009, May). Teacher collaboration in times of uncertainty and radical societal change: Post-Soviet context. Paper presented at the Annual Meeting of Canadian Society for the Study of Education, Ottawa, ON. (winner of CSSE New Scholar Fellowship as the best single-authored paper presented by a new scholar (assistant professor in education in Canada))